Course Map
Card Of The Course

Sitwell Park offers a tough but fair challenge, with one of the most highly respected finishes in the area. The holes snake their way across picturesque parkland, offering a diverse challenge for golfers of all abilities and experience. Boasting Mackenzie greens, characteristically fast, with some tricky reads, Sitwell is a course to be savoured.

Sitwell Park opened in 1913. It owes its existence to eight Rotherham men who decided to form a golf club on the south side of the town. Land was sought from notable local landowner, Sir George Sitwell, who offered part of his estate and agreed to bear the cost of building the course providing that a minimum of 100 members could be guaranteed by the time nine temporary holes were built.

The club was a great success with over 100 members enrolling within a week and in May 1913 the club formally opened with over 200 members. With open countryside to the north, south and east, this was the first course Dr Alister MacKenzie built for a private client rather than for a committee.

The original wooden clubhouse in Shrogswood, a photograph of which hangs in the clubhouse entrance hall, was destroyed by fire on Christmas Day 1930. Lord Milton officially opened the replacement, a “handsome building, in a commanding position overlooking the course,” in 1931.

In 1970 the club was extended, with the veranda converted to be part of the lounge and the locker rooms extended to accommodate the increased membership. The next milestone was in 1979/80 when the course was purchased by the members from Sir Reresby Sitwell.

Further extensions were opened in 1990, following a survey of members, resulting in an extended 19th hole, and additions of a ladies’ room, snooker room, extra locker room space, a committee room, professional’s shop, entrance hall, office and dining room. A new balcony, with panoramic views across the opening and closing holes and the countryside beyond, was added in 1999.

When the course was originally unveiled by Mackenzie to his client, Sir George Sitwell, some of his ideas were not universally welcomed! In particular, Sitwell baulked at some of the steeply contoured greens, believing them a little too wild for the tastes of the time. As a result, Sitwell ordered greens to be flattened, which in turn upset Mackenzie who felt the result was “dull”.

Today members and visitors find the Sitwell Park layout to be neither dull nor with flat greens – try the 9th green putting back down the slope for example!

A unique man of diverse talents, Dr Alister MacKenzie believed golf was the best medicine for many of his patients. His interest in it escalated to a consuming passion and he devised some of the world’s most interesting courses.

Nicknamed the “Course Doctor”, MacKenzie – who was a founding member of The Alwoodley Golf Club – was born in 1870 to Scottish parents in Yorkshire and christened Alexander.

A graduate of Cambridge University and Leeds University with degrees in chemistry, medicine and natural science, MacKenzie joined his father’s medical practice but was then called away to serve in the Boer War. Ironically it was the concealed trenches of the Boers that first nurtured his design ideas for golf courses.

MacKenzie took up medicine again after the war but then abandoned his medical practice in favour of golf course architecture. His decision to do this was in part down to his conviction that golf had very real benefits for patients, and he was quoted as saying: “How frequently have I, with great difficulty, persuaded patients who were never off my doorstep to take up golf, and how rarely, if ever, have I seen them in my consulting rooms again!”

He died in 1934 in California after a fascinating life, leaving behind a blueprint for future intriguing golf course designs and a legacy of classic golf courses, of which Alwoodley was the first.

Par 4, 352 yards
Pro Tip: a risk and reward hole. Lay up short of the bunker or try to carry it leaving a short chip into the green, but beware out of bounds down the left hand side. Careful placement needed on the green as it slopes from front to back, making the approach shot tricky. It is also well guarded by six bunkers. 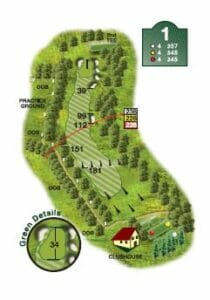 Par 4, 415 yards
Pro Tip: A long par four that requires a straight and long tee shot. Take care on approaching the green as a ditch runs across the fairway 60 yards short of the two-tier putting surface. Make sure you get your approach shot on the correct level for an easier putt. 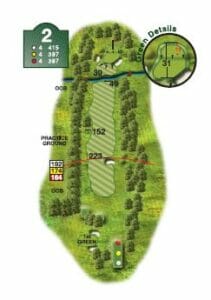 Par 5, 552 yards
Pro Tip: A choice of two shots off the tee. Take on the ditch and a 260-yard carry giving you a chance to reach in two, or lay up short and two more precise shots are needed to reach the green, which is tricky with a devilish slope off to the right. 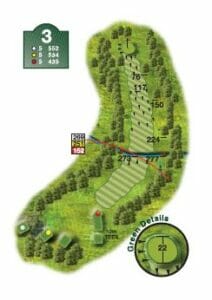 Par 4, 275 yards
Pro Tip: This short par four is a risk and reward hole. Take on the green with a long accurate drive and an eagle awaits. Or play safe and take a mid-iron off the tee leaving a simple chip into the green that runs from back to front and guarded by bunkers left and right. 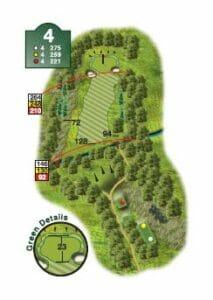 Par 3, 176 yards
Pro Tip: A lovely par three that requires an accurate mid-iron tee shot. It’s often worth taking an extra club as it plays longer than you think and the wind can swirl around the green for added difficulty. Tricky banks front and back for short and long hits, but the green is relatively flat. 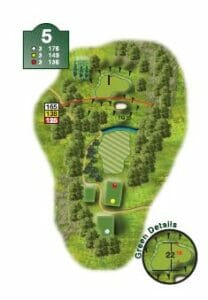 Par 4, 266 yards
Pro Tip: Trouble left and right with a left to right sloping fairway. This hole can be driven, but play it safe and take a mid- to long-iron off the tee leaving a wedge to the narrow, well-guarded green, that has a subtle and deceiving slope left to right. 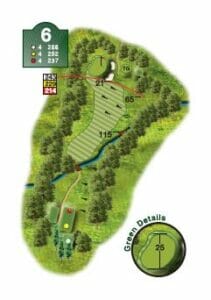 Par 3, 171 yards
Pro Tip: A tight approach to this well guarded green, bunkers front and right, with out of bounds down the left hand side 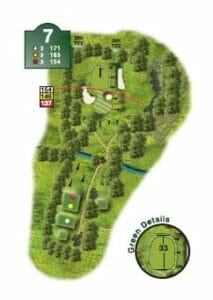 Par 5, 539 yards
Pro Tip: A downhill par five with out of bounds running all the way down the left. A ditch runs across the fairway 120 yards short of the green, so a precise lay-up is needed. A bunker guards the front right of the green. 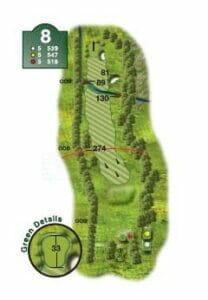 Par 4, 308 yards
Pro Tip: a short par four, reachable for the long hitter. Avoid the left-hand fairway bunker when laying up with a mid-iron, but the green is where the trouble really starts, sloping from back to front and right to left, so try to keep your approach below the hole, otherwise get ready for a rollercoaster! 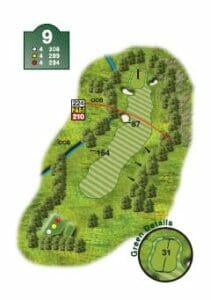 Par 5, 510 yards
Pro Tip: A generous par five to begin the back nine with trouble left and right flanking the wide fairway, although with trouble out of bounds left for a wayward one on the approach to the green, that is relatively flat. 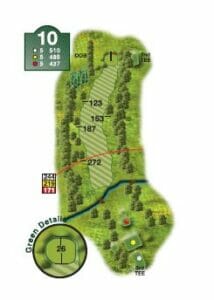 Par 4, 310 yards
Pro Tip: An accurate tee shot is required to avoid trees and fairway bunker right, a ditch left and for the more adventurous three ponds short and left of the green. Take a long iron or metal off the tee leaving a short iron into the green that is guarded by bunkers left and right. 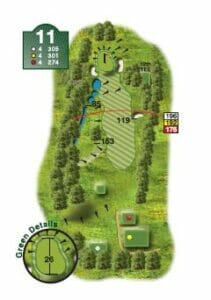 Par 3, 132 yards
Pro Tip: a short testing par three requiring an accurate tee shot with bunkers awaiting short left and right of the tricky green. It’s uphill all the way, so don’t be fooled by the yardage, you need one or two clubs more than you think. 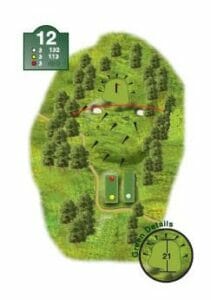 Par 5, 513 yards
Pro Tip: Out of bounds runs down the right. A good long tee shot is needed that can get you home in two for the bigger hitters avoiding the bunkers short left and right of the green. Or play safe with a good lay up, but there’s a hidden dip 120 yards short of the green. A left or long approach into the green will find sand. 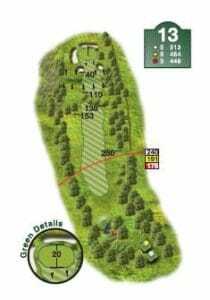 Par 3, 188 yards
Pro Tip: The only downhill par three on the course. Miss the green right and it’s a tricky chip, miss left and bunkers await. The green is a slider from front to back and left to right, walk off with a three and you will be happy. 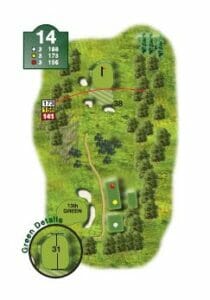 Par 4, 447 yards
Pro Tip: The start of a tough finish, with a blind tee shot favouring the left half of the fairway. The long second is to a raised green and difficult to reach and stay on – a challenging stroke index one hole. 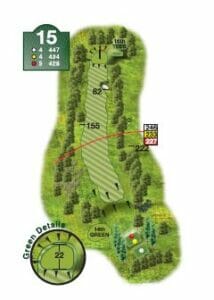 Par 4, 467 yards
Pro Tip: A very tight tee shot with trouble left and right and a sloping fairway from right to left. A blind shot into the green requires accurate club selection with out of bounds waiting long and left and a bunker short right. 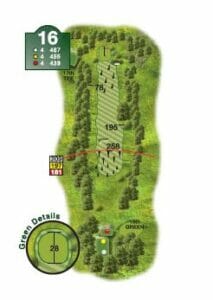 Par 3, 169 yards
Pro Tip: An uphill par three which has a run-off area left, right and in front for the shots that tantalise but don’t quite make it. The green is raised so an extra club is often needed to reach a sloping green from back to front. 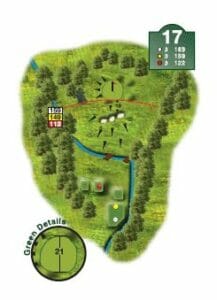 Par 4, 435 yards
Pro Tip: A very tough uphill finishing hole. The tee shot is vital with bunkers left and right and the longer hitters may make the hump across the centre of the fairway. Our very own ‘valley of sin’ runs right to left across the front of the undulating – and confusing – three-tiered classic Mackenzie green. 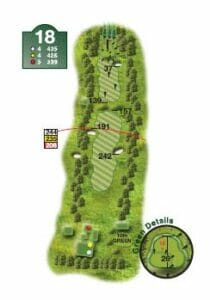